I helped save a possum on the way to work this morning!

I was, therefore, late for work, but totally worth it.

Now, I was already struggling this morning, and today will be a long day, just for how exhausted I am. For various reasons that I won’t get into. I was walking to the subway, headphones on, and saw a lady I know from early morning walks with Brody. She often has treats for him, and nuts and seeds for wildlife along the way. Super nice lady, if somewhat eccentric-seeming.

Anyway, she flagged me over, so I took off my headphones and shut my MP3 player off completely when she pointed to the frightened possum hanging out in the doorway of a business on Yonge Street. It was very busy and loud by then, and the poor critter was very much regretting his poor life choice.

Someone had found an empty cardboard box and stuck part of a cucumber in it, to see if the possum would climb into the box of its own accord, but it was still pretty far away from the little fella, and the possum had not moved from its spot in the corner of the entrance area. We definitely did want to spook it into traffic, or anything, so I placed a call to Toronto Wildlife Centre and left a message to let them know where the possum was, and to ask that they come check it out and then help relocate it.

Another woman had also called an left a message, so at that point I was considering just continuing on my way, but I’d also left my phone number on the message, and wasn’t sure what I would do if TWC called back with instructions, or something. So I stayed a little longer, estimating how early they’d be checking messages, and wondering if I should just wait. I texted a pic of the critter to my manager and said I’d be a bit late, but I didn’t have much of a plan at the time. Was just waiting and thinking and chatting with the lady who’d flagged me down in the first place.

Then a slightly older lady came along, and stopped to see what was going on. We told her that at least two of us had called to notify TWC already, and she said she was going to go get her husband because she thought they could trap the possum and drive it out there themselves. At that point, I decided to stay long enough to see how things turned out with the little guy.

It took some time, and the one lady and I basically played at guard duty while we waited, making sure dogs passing by didn’t notice the critter, and keeping an eye out in case the possum tried to make a run for it. Neither of us know anything about possums or their general behaviour in the wild, so we speculated on a few thoughts, but really – we knew we needed to do a bit more research after it was all over. Other than playing possum, which was not really helpful in this situation. This one was shivering in fear so violently that we could see its ears vibrating. Poor wee heart.

Anyway, the other woman returned with her husband in tow, and he was carrying all the tools of the wildlife rescue trade – or so it seemed to me. He had a sturdy plastic bin, a wooden board which would act as a lid, heavy duty rubber gloves, a box cutter and duct tape. Wasting no time, he swooped in to trap the possum between the glass doorway and the bin opening, then slid the board down through that same gap, which effectively shuffled the possum into the bin and kept it in there with the heavy board on top as he tipped it all upright. He used the tape to fasten the board on in such a way that it was secure yet still let in plenty of air, and carried the possum package to his car.

I called TWC and left a second message to let them know that the possum was on its way to them, and could they please give it a quick check-up to make sure it wasn’t injured before returning it to the area from whence it came. I then headed to work, but of course took a moment to post a photo of the little guy to Instagram, Facebook and Twitter. By the time I got to the subway, my employer’s Twitter account had liked the tweet, and by the time I got to work, TWC had liked the Instagram post.

I think within about an hour of my arrival at work, I got a phone call from TWC to let me know the possum had arrived safe and sound, and was in a dark, quiet space having a bite to eat and something to drink. The girl there said that wildlife often make bad life choices, especially when it comes to being home before the sun comes up, so the possum was probably fine, but they would check first to be sure. She also said that the man who’d brought the possum in had offered to go back and get it, and return it to a quieter place in the same area, if it was deemed healthy and ready to be put back into the wild. I thought that was pretty stellar of him, too, actually. It turns out that couple lives on my same street, so it was definitely a Keewatin kind of effort being put forth!

Just a short time ago, I got a notification from TWC on Twitter. They said that “he” is a “she”, and that she has at least one joey in her pouch! They also said they didn’t find any sign of injury, so she should be back in the ‘hood very soon.

How cool is that? I helped save a mama AND her baby from some uncomfortable at the least, fatal at the most, circumstances this morning! And still got to work only about a half hour late overall, which is much better than I worried it might be!

Good deeds are a nice way to start the day, I have to say! Yay Mama Possum! Rest up, and stay safe when you get back home! 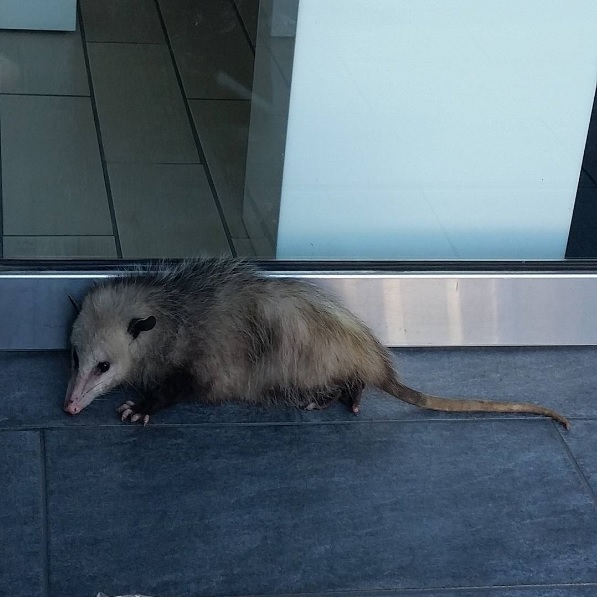